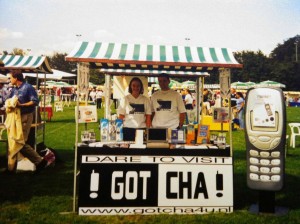 The Rise of the SIM-only

Indeed, it was in the fine city of industry and arbour that he attended courses and met like minded individuals.  What’s more he came up with an idea that broke open the closed, secretive world of telecommunications.

Ever heard of SIM only subscriptions?  Well before Sander introduced them in the Netherlands, they were almost unheard of! Yup, Sander changed peoples lives. Still does.

The Vengaboys were going Boom Boom Boom Boom.  Celine Dion was torturing us with that awful song from Titanic; and most of you were probably enjoying Babe: Pig in the City at the cinema. At 23, Sander was watching other movies.

He started to build his empire: Reclavisie. Christian Visser, one of Sander’s first (freelance) employees: “I was a student at the college of design in Rotterdam in desperate need of cash and experience when I found Reclavisie in the Yellow pages. I called Sander. Before I knew it I was designing flyers, folders and posters, making campaigns and build up a big portfolio. The office of Reclavisie was chaotic, small, crowded and warm but most of all a lot of fun! “

It was a staffing agency, a consultancy bureau and even a marketing agency.  All this from his rather large attic space in Rotterdam West.

After chatting with a friend of a housemate, Albert, Sander was introduced to the telecoms world.  They had an idea that was to break the market open.  Give clients back the premium paid by a telecom provider to a reseller, used to cover the giving of a mobile with the subscription. It was a golden market. Untapped.  Paydirt.

One webshop after another, growing his user base. A stand in the central hall at the university followed; 100 subscriptions in the first week, 500 the month after. Building in turnover and confidence, Sander wanted to push ahead. Albert was not as convinced. ¦ 1,000 bought the rights to the concept and the customers.

New phone lines installed in his student room, hiring in students to call and get even more customers and service the needs of those already signed up.

Eventually there was no space in the attic for another hire.  No space for any more people to process all the paperwork.  So he did what any student with a proto-company would do: sign a five year lease.

At the beginning of the year he had been a child.

His investment and lease forced his growth.  Staff too.

It was fun, and as fun normally is, it was messy. And therein is our next chapter! Success was on the horizon!  But something darker too.

Serial Column written for HOPE by Keith Wallace, also to be read here.